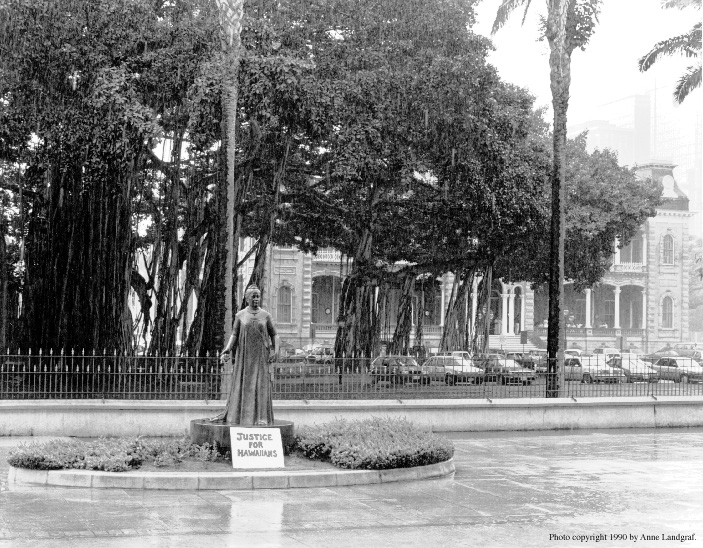 He Mele Inoa no Aikanaka

A Name Chant in Honor of Aikanaka

Oh Kama, look, and observe thy lands,
Oh thy lands oh, Kama, oh, retain them
Thou child, child, child of the highest grade
Thou child, child, child of the turning tide,
Overthrown are the foundations of the land
Overthrown, and with its face downward
Oh! thou Uli, look, and observe overthrown is Manuakele
Overturned on the coral rocks of Ku
For the eyes of Ku, and the cord of Makiilohelohe
There the cords that bound Hulahula
Are loosened and opened
Thus will the centre of the land be moved
For the stone weights of the Bonito nets
And the Bonito net of Ihuaniani
With the stick of Uini, and Laa and Keawe
And the bird that ate the sacred Bonito
The golden-haired child of Kama [Maui] from Kanaloa.

For fifteen hundred years the Hawaiian people perpetuated life, with help from the land, sea, and sky. Even after the first European explorers arrived in the islands, in 1778, introducing diseases and customs that began to unravel the native culture, most islanders saw no reason to heed the words of the prophet Keaulumoku, who forewarned that his people would be overwhelmed by foreigners. In his chant "He Mele Inoa No Aikanaka," Keaulumoku urged the newborn chief Aikanaka to hold on to his lands and culture during the coming apocalypse.

Little more than a century after the explorers' arrival, the fears of Keaulumoku were realized. Foreign diseases had killed most of the native population in the archipelago; foreign ideas had gutted the Hawaiian religious and political systems; and foreign commerce had transformed abundant small, native farms into vast sugar and pineapple plantations owned by Caucasians. In 1893, a few foreign men used the threat of armed force to overthrow the Hawaiian monarchy, creating an oligarchy and eventually gaining U.S. annexation. In the following decades, newcomers helped commercialize the remains of the native Hawaiian culture and landscape, resulting in millions of tourists and thousands of new residents being lured to the islands each year.

Similar histories can be heard around the globe, in country after country where cultures have been absorbed as a result of changes wrought by newcomers. In modern Hawai`i, few visitors or residents think about what the Hawaiians have lost and why so many of them are so angry. Nor do they understand the pride of many Hawaiian people-pride in the roots of their native culture, which goes deeper than the orchid lei tossed around a vacationer's neck.

Joe Chang, a Hawaiian professor of English, described the situation in an essay for Ke Kia`i: The Guardian, a publication of the Native Hawaiian Advisory Council:

"There is so much Hawaiian decor and treatment [in the islands] that few people will stop to think that they really don't know very many Hawaiians. Those they know, they know in the most superficial of ways, or they only know those who have passed over into the mainstream culture, having left behind that which was truly Hawaiian. I have a hunch that most local people care in an abstract way about preserving Hawai`i and its ancient culture. But because they really don't know Hawaiian people as Hawaiians, they don't appreciate the depths of pain and anger that this generation of Hawaiians is experiencing. Because they themselves are fairly comfortable with the status quo, and because they think of themselves as kama`aina [Hawai`i born], they can't understand the Hawaiian movement-the restlessness of the Hawaiian spirit."

At places unknown to visitors and many residents - Ke`e, Halawa, Ka`ana, Hakiowa, Honokahua, Pu`u Kohola, Wao Kele O Puna - Hawaiians from time to time gather to chant, dance, and sing. Elsewhere, they plead, protest, and sue with the hope of persuading bureaucrats, politicians, and developers to acknowledge their culture and the native claim on the land.

Claims for recognition persist one hundred years after the armed usurpation of the Hawaiian kingdom, which was followed in five years by American annexation. Hawaiian expressions of anger, pride, or cultural awareness surprise many tourists and disturb non-Hawaiian residents accustomed to silence or smiles from the native population. When indignation and anger stand alongside aloha and humility, sympathies disappear. Alienation will increase unless more people understand the past and the barriers between the kanaka maoli (native Hawaiians) of today and the traditions that nourished their ancestors for generations.

In an interview published in MidWeek, an O`ahu newspaper, hula master Kawaikapuokalani Hewett called on all non-Hawaiians to support native Hawaiians as they seek justice and the preservation of their heritage. "We're not angry at non-Hawaiians," he said, "We're angry at the injustice that was done [to us]. . . . If you are not aware of the way in which the United States acquired Hawai`i, go out and educate yourself."

For me, that education came late in life. I went to high school in Kailua, but I did not become curious about my island home until I returned to O`ahu after college and graduate studies. As a reporter for Honolulu's morning newspaper, I had opportunities to meet Hawaiians and report on their efforts to perpetuate the native culture. Those stories led to encounters with other Hawaiians, people whose lives might be easier if they used their energy and intelligence to become "successful" in the modern American understanding of the word. Instead, many choose a life-style that combines the foreign and native cultures-paying off the mortgages owed to one as they strengthen the foundations of the other.

These ambitious people have established schools where they are reviving the Hawaiian language; they train navigators, build canoes modeled on ancient designs, and embark on voyages to confirm the old stories about Polynesians who traversed the Pacific generations ago using only their knowledge of sea, wind, and stars; and they lobby successfully for millions in federal and state funding for programs to promote Hawaiian health, education, arts, self-sufficiency, and nationhood.

I left my job at the newspaper to share some of their stories in this book, a collection of profiles about native people holding on to their heritage today. During my research, I encountered some Hawaiians who believe their stories should not be shared and a few who do not want to be written about in "another haole's book." Outsiders often exploit and misrepresent Hawaiians and their culture to make money or reputations for themselves; that is not my intent.

My newspaper work opened doors to modern Hawaiian life, and I want to open some of those doors for others. These glimpses into contemporary Hawaiian life may help readers understand how the Hawaiian culture is being perpetuated. Perhaps after reading them, you will be inspired to learn more.

From the start, I intended to have Hawaiians participate in this project-it would not be solely from the perspective of an outsider looking in. Anne Kapulani Landgraf provided the photographs, and other Hawaiians contributed songs and chants. All the people I interviewed read their respective sections before publication and made changes to ensure accuracy and privacy. This is their work as much as mine, and any profits from it will be shared with them.

Although many of them live on O`ahu, the most urbanized of the Hawaiian Islands, I intentionally chose these Hawaiians because their dedication to living the culture is noteworthy. They are optimistic, independent, hard-working people-role models for all of us. In sharing their stories and their history, I have tried to follow the advice of Mary Kawena Pukui, whose contributions to modern Hawaiian scholarship are unmatched. Mrs. Pukui used to say, "Do not look back on the past with scorn and criticism, look back with understanding and appreciation."

This is a book about modern Hawaiians-their roots and their evolving culture. I hope these portraits will draw you into the true life of Hawai`i.